Many film-goers go to the movies to have their world expanded and minds challenged, and while the latest action blockbuster extravaganza can offer that, sometimes you want to see something different. Whether that is an animated avant-garde short film, a documentary shining a light on social issues, or live cinema performances blending the line between live action and art, Metro Detroiters have two great opportunities to see something different at the cineplexes.

The upcoming Ann Arbor Film Festival and Freep Film Festival challenge audiences to see cinema in a new and exciting way. With an emphasis on local issues and artists, both film festivals show audiences the power of cinema in ways they may not be custom to seeing.

The 57th annual Ann Arbor Film Festival kicks off on Tuesday, March 26 and will run through Sunday, March 31. The world-renowned festival has been delighting festival-goers with unique and challenge films from exciting artists.

You never know what to expect, and with a range of avant-garde short and feature length films, along with live cinema performances, something interesting is always taking place. Executive Director of the festival Leslie Raymond said that the festival makes artists confront audiences with various artistic interpretations and open a level of engagement that isn’t seen with most other movies. 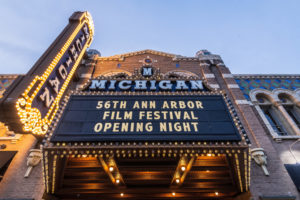 “If you think of mainstream cinema as reading a novel, our festival is more like reading poems. [The films] might not be a roller coaster like most Hollywood movies, but we offer food for thought and films you can’t see anywhere else,” Raymond said.

On the other side of the spectrum, the sixth annual Freep Film Festival dives into local issues and history with a curation of documentaries. Many of the films also feature Q&A’s with the filmmakers and subjects of the film.

Many films will feel personal to Metro Detroiters, such is the case with the opening film “Boy Howdy! The Story of Creem Magazine.” Focusing on the legendarily raucous Detroit based rock ’n’ roll magazine, Creem, the movie will be coming off its world premiere at South by Southwest Film Festival in Austin and will be playing at the legendary Fillmore Theatre in Detroit.

This year’s festivities features over 80 events at over a dozen spots around Detroit including The Detroit Film Theatre, Cinema Detroit, Emagine Royal Oak, and for the first time, the Patriot Theater. This is also the first year that the festival will be offering festival passes, both standard and VIP, which you can find at freepfilmfestival.com.

“There are so many exciting, innovative things happening with the form. And people are responding, whether it’s at festivals, for big box-office runs – like ‘Free Solo’ or ‘Won’t You Be My Neighbor?’ – or on streaming platforms like Netflix,” Byrne said.