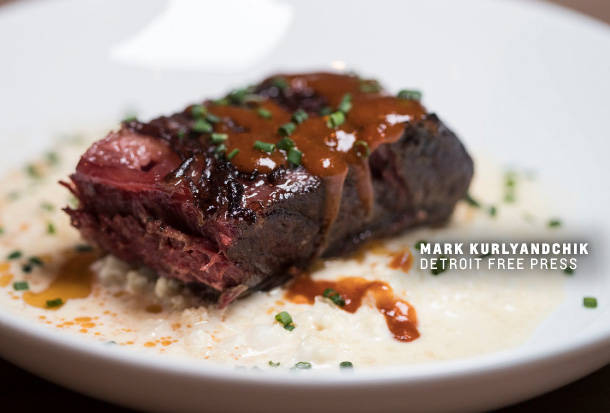 Do you want to experience a free meal at one of the best restaurants that Metro Detroit has to offer?

Need to hear a little more about the restaurant before you head out for a meal? Keep reading for a glance into this award-winning restaurant.

Detroit is home to some of Michigan’s oldest streets – the thoroughfares and main roads that helped define who we are, how we work and where we want to go collectively as a society. Fort Street is one of the most revered of them.

It is particularly apt that a food hall that offers variety, style and substance should honor this iconic street. Fort Street Galley is the kind of place that wants to serve as a launching pad for new concepts, to help build Detroit’s burgeoning restaurant scene and to highlight great chefs with help with marketing and other resources.

For Pittsburgh-based Galley Group, Detroit and its unique food culture was an alluring opportunity. They opened Fort Street Galley in December to much praise with four original concepts. Two have moved on, and the two newcomers to the space are already gaining a reputation for great eats.

There’s Detroit pizza makers Michigan & Trumbull and Table, a Southern-inspired restaurant. The two that most diners are familiar with now are Lucky’s Noble BBQ, a health-focused barbecue joint, and Isla, which serves tasty Filipino food.

Some history: Fort Street, also known as M-85, starts downriver. Picture a little spot near Rockwood and Gibraltar Road. It goes another 22 miles, hit spots such as Trenton, Riverview, Lincoln Park and Detroit, serving as the border of Detroit’s historic Delray neighborhood. At the north, Fort ends at Griswold Street in Detroit, one block from Woodward Avenue.

Recently, Ben Mantica, co-founder of the Galley Group, talked to me about why he named the concept after Fort Street. Honoring Detroit and its history with such a moniker was interesting to me, and I wondered how the name came about.

“We aim to work with chefs that have a strong connection to Detroit and we always look for buildings that have historical significance,” Mantica said. “With that in mind, we wanted to pay homage to this city and celebrate its growth. Naming it after Fort Street was an easy decision.”

“We like to create a sense of place when naming one of our food halls,” he added. “With a mission to serve as a launch pad for the city’s best culinary talent, we want both the chefs and guests to feel a sense of pride and ownership when they walk into Fort Street Galley. There is a lot of passion and history in this city and with all of our chefs being Detroit-natives, we wanted to create that special connection from the start.”

Over the decades, Fort Street has enjoyed its highs and lows. That starts with high society way back to low occupancy and empty lots. There are some stretches that look like an English moor – vast and prairie-like – even though they are inside one of the most industrial cities in the world.

For some, Fort Street is a symbol of all that Detroit has gone through. It held a military fort. It gave a home to millionaires and million-dollar companies. Now, its legacy lives on through its restaurant namesake, giving people fun and food to remember. Fort Street Galley wanted to feel like home, and its location and respect for history shows that and then some.